Truth be known, I did not leave Chicago after a rollicking, 17-year column-writing career because I was fired, rolled into Lake Michigan by one of Jerry Reinsdorf’s henchmen or left to burn in a french fryer at Ditka’s restaurant. I departed on my own terms while handing back almost $1 million in guaranteed contractual money. I resigned because the newspaper for which I worked, the Sun-Times, was a corrupt little insane asylum that had no vision of a digital future and had become a microfarce of its former pugnacious self.

My resignation brought more timely symbolism to the decline of newspapers, and I was featured in a segment on the HBO series, “Real Sports with Bryant Gumbel.” In 2008, the editors awarded me with yet another three-year contract, but I signed it only with a caveat: The Sun-Times would pledge to launch a competitive website, starting with my venture to the Summer Olympics in Beijing. I could laugh off the paper’s relentless in-house dissension, which was encouraged by editors who didn’t mind when staffers wanted to threaten each other in the newsroom or even in public places. As the city’s most visible sportswriter, I was oddly the target of several of these attempted skirmishes, playing peacemaker when an aging colleague, former football player Rick Telander, would hazily challenge me to fights in press boxes or a troubled city-side columnist, Neil Steinberg, would wander into the sports department and try to provoke me each morning when I was preparing for my ESPN television appearances. The atmosphere was toxic. This was the very definition of a dying newspaper, and I realized it one winter’s night when I went to my health club and ran into Telander, who promptly alerted some sophomoric website that I was in the sauna. I also realized it when two top editors, the long-departed John Barron and Don Hayner, encouraged me to wear a White Sox cap in my column logo during their World Series run; when I declined, it was said I was a bad employee.

I wanted to move on — every month brought a controversy beyond my control, initiated by some moron who wasn’t worth my time — but the money was too good. One of my daughters was in college, another was on the way. My agent talked me into staying, but sure enough, in China, it became obvious early in the Games that my Michael Phelps columns wouldn’t be posted for hours after his historic victories. One day, while walking the Great Wall, I had one of those life epiphanies: Get the hell out of that newspaper before you drop dead. A year earlier, I’d suffered a minor heart attack while traveling to a meaningless Notre Dame bowl game in New Orleans. I did not want to keel over on the job — and certainly not while working with those people at that place.

On the plane home from Asia, I crafted a polite resignation letter to the publisher. The rival Tribune got wind, called me, and I confirmed it. The Trib ran the story across the top of its business section, and it was accurate. All of which infuriated the Sun-Times, which responded a day later with a pack of published lies that tried to claim I’d been forced out. Yeah, right, give me a three-year contract one month, force me out the next month. Even the late, great Roger Ebert, who I think I talked to once in my time there, was coaxed to write an open letter in which he called me “a rat.’’ In fact, Roger wanted the same digital advances I did, but after I’d told the rival paper that I didn’t feel comfortable going down with such a directionless and dirty ship, Ebert was pressured to defend the place.

That week, I met at the Park Hyatt hotel with two top editors at the Tribune and was advised by the editor-in-chief, Gerould Kern, to sue the Sun-Times. The Trib was too sleepy to hire me, and weeks later, I signed on as AOL’s lead sports columnist, part of a web initative of more than 80 sportswriting hires. By 2010, that site was doomed when AOL cut a content deal with Arianna Huffington. I was given an ample financial settlement. The Sun-Times stumbled through a series of owners who tolerated more red ink and massive circulation declines. It struggles to survive today, barely afloat with a modest local presence and no national impact.

“Do you ever regret leaving the Chicago Sun-Times?’’ syndicated talk host Dino Costa asked me recently.

“Nope,’’ I said. “I’d be dead. I either would have collapsed or someone would have executed me.’’

I’d made a lot of enemies by simply telling the truth in a passionate, sometimes psychotic sports town. But that isn’t why I left, contrary to the lingering myth. You don’t dream of working in a town like Chicago, only to discover through time that the stench of in-house corruption overwhelmed the sweet smell of ink on newsprint. When my publishers and editors weren’t ending up in jail or cutting deals with the tyrannical Reinsdorf, who wanted my hide for years, they were undercutting our ability to compete by not cultivating a strong digital base.

Last time I was in town, I looked for a copy of the Sun-Times. I saw a box on a Sunday afternoon in the River North district. The paper displayed inside the box was from the previous Thursday. 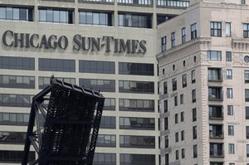